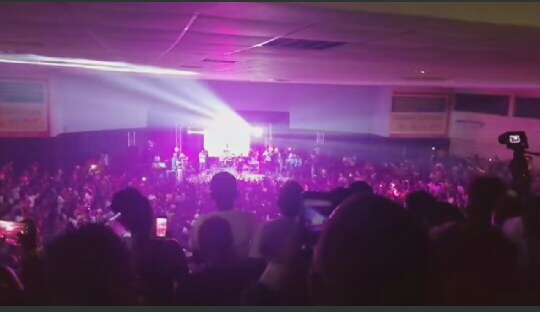 Blantyre’s Robin’s Park was a place filled with emotions over the weekend as music fanatics witnessed 18-year-old Eli Njuchi pull a large crowd on Sunday.

Most of the young artist’s fans made their way to the venue by walking in rains that poured just when the show was starting.Queues delayed car drivers travelling to different destinations along the road leading to Robin’s Park.

Fans stood in long lines just to get their way into the venue where Eli Njuchi was launching his debut album, The Book of Eli.

The venue saw thousands of fans disregard Covid-19 precautionary measures as neither social distancing nor wearing of masks was practiced while they watched the ‘Zitheke’ hit-maker get supported by Piksy, Suffix, Saint, Phyzix, Hayze Engolah, Classick and Charisma, among others, as they graced the stage with their performances.

Eli Njuchi’s set made him drop tears on stage as he looked to be in disbelief at the thousands of people that were singing along to his songs word-by-word.

However, in an interview, Eli Njuchi said, all along, he knew that he would one day pull off such a huge crowd.

“As a young person, it is something I had always dreamed of. I worked for it and I am truly grateful to everyone that made their way to the show to make my dream come true,” he said.

South Africa-based Malawian artist Gemini Major—who rose to fame through a song titled ‘Ragga Ragga’ in which he featured South African artists including Cassper Nyovest— performed at the show as he was already in the country.

The artist said he came to support Eli Njuchi as he was inspired by the artist’s talent despite being a young creative.

“I was in the country for a different show that happened on Friday. When I saw that Eli Njuchi was launching his album, I decided to come and support the young artist. I felt emotioal as he was performing because the love Malawians showed Eli Njuchi was something I haven’t seen in a while,” he said.